The pilot grant of e-visa has been applied within 2 years since 1 February 2017 for foreigners from 40 countries in Asia, Europe, and Americas. On 29 November 2017, under Decree 124/NQ-CP of Vietnamese Government, 06 countries added to the list of countries which have been piloted to issue e-visas. The border gates allowing foreigners to enter and exit by e-visas include 28 ones, consisting of 8 air ones, 13 land ones, and 7 sea ones. E-visas granted through electronic transaction system are single-entry visas with validity of 30 days. Fee for e-visa is USD 25.

List of international border gates allowing foreigners to enter and exit by e-visas: 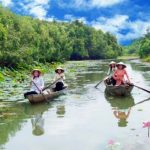